Mitsubishi "Invisible" at the Mill. 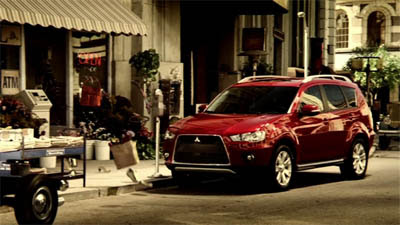 Happy Holidays!  December is here, and the first spot I completed while working at the Mill is now airing.

Mitsubishi "Invisible" hosts CG clothing of the people who do not 'stand out'.  Not until they get inside the car of course.

Here is another link to it:
BeamTV - The Mill

I served as a General CG artist for various shots.  Everything you see that is associated with an 'invisible' person or vehicle is CG.
I'll also have a Herseys spot coming out next week I'll post asap.

In the coming weeks I'm starting a Superbowl spot with a host of VFX that should be rather spectacular.  I'll keep you posted.

Well, I submitted 3 variations on the same design, and low and behold.  I won!  I was notified that I was 'best in decade'.   I'll never have to pay for hosting again.  Hazzah!

I'm pretty stoked about it.  I wasn't even REALLY crazy about the design I submitted, but it was inspired by a recent party invite I got from a friend.  Thought it was appropriate for this contest.

In other news, I'm continuing my research to develop my online Director's presence.  I seem to be getting more and more interest in my Directing.   So that just leaves me with digging through all my work, and getting the spots I Directed into a more presentable form online.   I think I'll even get a new domain...   Hmm..

More soon.
Posted by kungfukoi at 2:19 PM No comments:

Work for the Fall

So with the coming of the new season here in the city, there is so much energy in the air. Good things happening, so hang on.

For the last few weeks, I've been freelancing as a CG FX artist for 89.edit.  Nice bunch of people, with a nice studio.   My contract with them is up on the 31st!


Then on the 1st, I head over to service one of my favorite commerical VFX companies in the biz "The Mill".
Not clear on what roll or capacity I'll be in use, but I'm looking forward to getting to know the talent over there, and hopefully get to contribute on some good work during the whole situation.  :-)

Tentaclecloud.com is alive and well!.   The Alpha is released, and we're starting to pick up users.

Finally, I'm thinking of setting up a Directorial website, that would only showcase my Director's work, and in hopes that I can better sell myself as an CG/VFX Animation Director.  I'll keep you posted.

Looking forward to the next few months when the weather gets chilly, and all there is to do is huddle indoors and work on personal projects.  Looking forward to it so I can get some more quality time with "Invasion"
Posted by kungfukoi at 2:36 PM No comments:

That's right!!  You can't stop it!  The Tentacle Project is coming!
[ tentaclecloud.com ]

In fact, I have just received the very first alpha version of the Tentacle Project, and [ kungfukoi.com ] is in-fact powered by Tentacle currently!!  That's right, tentacle is up and running, and the driving force of the this site.   Stay tuned to tentaclecloud.com for updates about what the Tentacle Project is, and why it's the most awesome web developers environment ever!!

Also, recently have aquired a 13"Macbook Pro, and am joining the ranks of nerds with mac's.  I got it for the development platform it offers for the iPhone and the Web.  Plus, it's time I learn Mac again... ( read: unix )

And Finally, I'm heading back to Texas for a couple weeks, to visit family, friends.  So if you are one of those and are reading this.  Call me, lets get together.  :-)   I've also started a personal blog for all the stupid stuff that didn't really fit on here.  Please follow me here:
[ warriorginger.blogspot.com ]

Enjoy!
Posted by kungfukoi at 11:03 PM No comments:

Remember back in the dawn of the internet when you would say a site is 'under construction'? It was how you would tell people that the site is being worked on and will be improved shortly. You don't really hear people saying that any longer. I wonder why.

Well, I'm bringing it back. At least for now. www.kungfukoi.com has moved off Speakeasy, where it has been hosted since the dawn of time. To Dreamhost. ( unlimited space, bandwith for your life, only $6/mo! )

The entire site, galleries, and misc content are temporarily down, as I build a dynamic and super cool back-end for the site that hopefully will make updates and re-designs easier in the future. So for now.. I am keeping my contact info, and reel up.. you know, for self promotional puposes.

However, I fully expect to have the new re-branding and site up in the next few weeks/months. The new site will also come with it some new features that I won't go into yet. However, I'm pretty excited about it!

In other news, I'm finishing up my current contract with Psyop and will fully available for bookings on the 22nd.
I've also broken down and aquired a Twitter account. So if you are so inclined.. follow me at: www.twitter.com/kungfukoi . I have started to peck around on it, and think that if I just use it for a work-related feed only, perhaps I'll be able to justify it. After all, I have a Facebook for the personal stuff right!? :-)
Posted by kungfukoi at 1:30 PM 5 comments:

Guiness Dot on permanent viewing at the MOMA!

So this spot I helped with, served as as sequence lead, is now on permanent viewing at the Museum of Modern Art! I can say now say I have a piece in the MOMA. heh.
( Lead the Black and White jungle that grows on with a panther sequence )

Guiness Dot
Uploaded by Actupub -
Posted by kungfukoi at 9:49 AM No comments:

It's been a whirlwind couple of months. Last month I finished up the MTV gig, which was a really quick turnaround project. I think I had two weeks or so to turnkey the spot. They wanted the 2D style typically associated with After Effects. Check it out here, I'd love to hear what you think.

Since then I have gone back on contract with Psyop, who have always been great to work with!
I'm working on an international Psyop spot for Playstation, so you know that'll be some fun-eye-candy coming out soon. So keep the eyes open.

My contract with them is up May 23rd and am not booked beyond that at this time.

I'm going to be updating/re-doing the KungFuKoi.com soon. I'm moving hosts, and using that as an excuse to update and redesign the site. The goal is make the entire site more dynamic so it's not such a chore to update it. I have so much content these days, it's hard to organize, update, and just keep interesting all the archival content. I want to keep it out of the way so it's not overwhelming, but still online, so that I can easily get at it. It looks like I'm going to be moving into a world of PHP, mySQL, and other acronyms that are boring and dry.

But hey, I'll have a jazzy new site worthy of being on ( insert your trendy design promotional blog here ).


Posted by kungfukoi at 8:51 AM No comments:

Well, I read somewhere, that you know you are happy when you don't update your Blog.
Apparently, I've been extremely happy. :-)

Ok, big changes. Mass Market has made some cutbacks, and that resulted in me going back on the independent/freelance market.

So, with that, I've had the opportunity to work with click 3x, on an MTV promo for Star Trek. Was a lot of fun, and got to meet some fun new people!

So with all the hustling, I'm going to attempt to revisit this blog, and find a more interesting format.

I'm also looking to update it weekly. We'll see how that goes.

Posted by kungfukoi at 7:39 PM No comments:

My Directorial Debut for Mass Market is finally online ready to show!

This Nascar spot was done for Sprint, for the Daytona 500 and Nascar season. I imagine it'll run like very nascar race...

I'm very happy with the spot, and really enjoyed working with our team at Mass Market to make it possible.

It was an ambitious undertaking, and I think the end result speaks for itself.
Posted by kungfukoi at 9:06 PM No comments:

The spot I worked on back in August as an Animation Director, is finally airing and I can show it here...

I'll post a bigger version when I get some time.

This spot was entirely done with XSI's ICE system.
Posted by kungfukoi at 12:08 PM No comments:

Well it looks like they took down the link to the Stereoscopic HP spot. It was turned into 3D for the superbowl, but I don't think it aired.

See them here: XLIII 2009 Superbowl Ads
Posted by kungfukoi at 8:52 AM No comments: