IPOD TO: Perfection by AMG
WEB TO: My My Space

Kerry Tescher wrote me and asked if I would post a blurb about the 2006 Nicktoons Film Festival. The Nicktoons Film Festival is accepting animated shorts (up to 10 minutes in length), between now and May 31, 2006 for its annual competition. Shorts selected for the fest air on the Nicktoons channel during August and one will be selected to win a $10,000 Grand Prize. Judges include Seth MacFarlane of Family Guys fame. Any medium of animation is acceptable: flash, traditional cel, stop-motion or CG. For more info go to: www.nicktoonsnetwork.com/shows/animfest/. Frederator also has a blog for Nicktoons…it’s pretty active and fun: http://frederatorblogs.com/nicktoons.

I still have tons of updates that I just haven't sat down to upload here and on the news section.

A few things of note, Janimation just wrapped up another cool Game Trailer Directed by Greg Punchatz. I'll post more when it goes public, I think at E3! I worked on a rather daunting crowd shot, animating, lighting, and compositing well over 100 characters, some of which interact and fight! So look forward to that in the coming weeks.

I still have yet to post the article written about me in Animation Magazine. I'm pretty proud of it! I just need to scan it and upload it. If you must read it, go out and get this months edition!

Invasion has been idle while I've been working on the project for Janimation, but now I can get back and knock out a few more shots on the trailer. At least it's moving forward again!

Finally, I've sent out an Animated Series Bible to my people out in Hollywood, I've mentioned it before, but the project is gaining ground and will be hitting the streets in the coming weeks. I'll keep you posted on the meetings and how they go as they get set up! The project is really getting some momentum, and for the first time since SCTV, I have a Show Runner, and Executive Producer who are whoring it out to them Hollywood types! I'll keep you posted!

One last thing! I've never had anything close to the devotion that Korinne Roesner has for anything! And I'm thankful that she focusus her devotion for the rest of her life to "Day Off The Dead!" She got Tattoo's inspired directly from our shortfilm's character designs! How cool is that!? Korinne is from France, lives in Strasbourg with her Bullterrier Tara, and is "DOTD's" #1 superfan! Check her out! 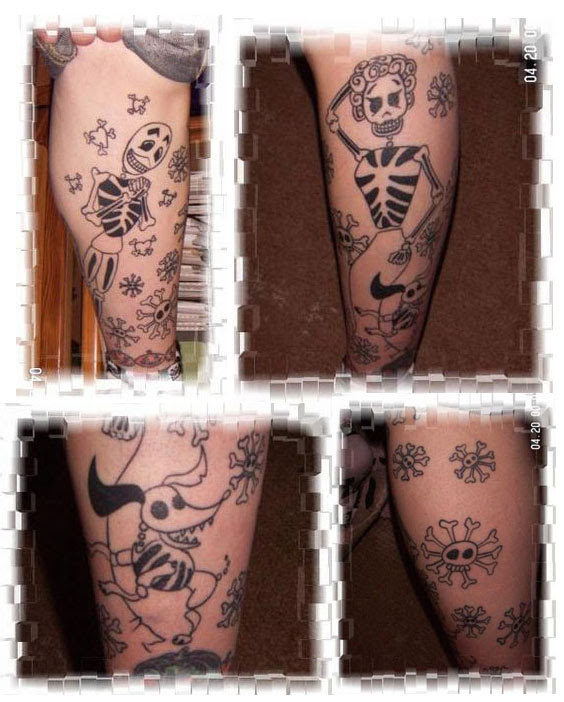 Posted by kungfukoi at 8:09 PM No comments:

IPOD TO: Slim Cessna's Auto Club
WEB TO: Identifying Animators and Their Scenes

Well it's been awhile since I've been motivated to update this. I have several updates and need to focus long enough to get them up. 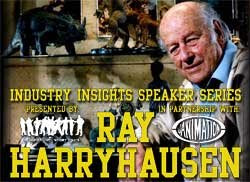 Last week A Bunch Of Short Guys and Janimation hosted Ray Harryhausen!! We brought him out during his book tour, so that Dallas fans could quiz him on what makes him so good! It was a blast!

He got a tour of Janimation, and we all got our few minutes with the man to say "hiya", and to bask in the glow of old-school-stop-motion genius!

Ray is still sharp minded, even at 86! Pretty amazing! He was touring his book, and showing a new film he produced along with his parnter. The film is done by a studio on the West Coast, and the name escapes me. It is basically an animated re-telling of Edger Allen Poe's "The Pit and the Pendelum". I enjoyed it because, well I know how hard it is to put something like that together. There was alot of dicussion of the subject matter. ( Poe ). Some of my collegues gave the short "thumbs down". I was rather suprised by the Negative tones they used. Considering all the folks who were "poo-pooing" the short, hadn't even made one themselves! Speaks of ignorance, and lack of respect. After all, to be a bit dramatic, None of us in the FX film biz would be here if it wasn't for the pioneering FX work of Ray. Not just animation, but Ray was the ILM of his time. It just so happened that he was mostly doing creatures. But I figured for the short, they were able to get it made, tell a story, and actualy finish it. Kudos! It was animated rather crudely by today's standards, when you compare it to such polished stop-motion wizards like Aardman, or Henrey Selick, but it was sure fun to watch!! 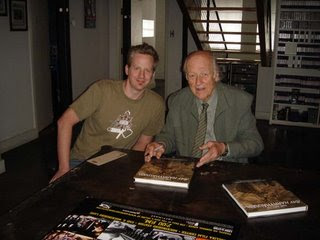 Janimation hopes to have more opportunities to bring more filmmakers down so we can pick thier brain! It was a great event, sold out and everything! Hope to see you at the next one.

One of the guys at the office, we'll call him "Greg", is a giggling school girl at the mere mention of Harryhausen. Ray is the reason our fictional character "Greg" even got into the FX biz at all. "Greg" also focusus on creature creation and design as well as bang on animation!
So it was fun to watch "Greg" all beside himself. I don't think he stopped smiling all day!

What I also found fun was seeing our "young guys" learn who the hell Ray even was. At Janimation, we have this one artist from Translyvania. Seriously, Translyvania. Young guy, EXTREMLY giften in all things art-production, and is budding into a 3D generalist! So this guy is pretty new to the industry and is cutting his gums on Janimation. On the day of Ray's visit, this kid blurts out in confusion, "Why did he bring a toy Skeleton?". Well, let me tell you, after the laughter settled down, this young 'slyvanian' got an education of ridicule. I think he still gets teased about that. He'll never live it down! Ha! So that goes to show you. Learn your damn animation history! If you don't know history, you'll be made fun of by those who do! Know your Art history, no matter what medium. Just for heaven's sake , know it.

Well, this may have been the last time Ray tours around like that. I hope this is never referred to as his 'farewell tour'. But either way, I was extremly thankful to meet the legend. Finally, my faith in animation was just confirmed by Ray. The most talented animators just work the hardest and longest and pour more of themselves into thier work. Just like anything, good work is usually is the result of painstaking hard work. Well that's all the Ray I hav e to share.

In the mean while, I'll leave you with a CU of one of Ray's actual armatures he brought with him! Pretty neat!!
( I was asked by Ray to "not count 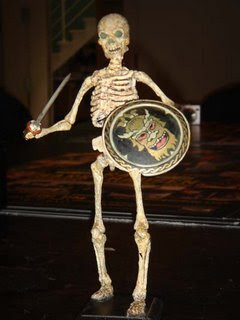