Two PSA's I had the privilege of Directing at Mill+ for the Red Cross are now on air!  I hope you enjoy them.

With your help, the American Red Cross brings help and hope to people in need every 8 minutes, every day. This season give something that means something.

This badge helps save lives. Make an appointment to donate blood or platelets today at redcrossblood.org
Posted by kungfukoi at 1:10 PM No comments:

Mill+’s “Wayne the Stegosaurus“, our sweet visual narrative about a lovable dinosaur with a very, very tiny brain, received a gold for Motion Graphics at the 2014 Ciclope Festival!!

Read more about the award here.

Go behind-the scenes as Aran and I talk about process.

and enjoy it again...

Wayne The Stegosaurus from J Dates on Vimeo.

Posted by kungfukoi at 1:17 PM No comments:

A series of NFL spots for Direct TV

The above are two out of the eight I supervised for the campaign. I'll look into getting the rest uploaded in the future.

Grey and MJZ's Matthijs Van Heijningen worked with The Mill on 'Landing,' the first spot in the 'Most Powerful Fan' campaign for DirecTV's new Sunday Ticket feature, which allows NFL fans to watch their favorite team no matter where they live.

The most powerful fan causes a bit of a fuss with the force of his devotion to the Philadelphia Eagles. With a mighty super-hero jump into his cul-de-sac, he lands with such strength that it causes a shockwave that kicks up grass, road, cars, and even the neighbor!

VFX Supervisor, Gavin Wellsman explains "From the start the creative team knew this project would be a great opportunity to push the CG capabilities and build an innovative pipeline for the ripple effect. "The VFX had to be larger than life, since the 'most powerful fan' affects his surroundings in quite a unique way. A wave that rippled through the lawn and driveway was created. The 3D artists set out to develop a method of creating the shock-wave effect prior to the commercial shoot."

VFX/CG Lead Jeff Dates expands "The pipeline that was created used Mill proprietary workflow to allow the artists to design, create, simulate and render over 25 million blades of grass, rocks and roots that made up the grass/sod alone, via a method that was able to be updated daily for creative feedback and art direction. " It is the behind-the-scenes R&D of the technical pipeline that really made the photo-real visual effects in 'Landing' possible.

Posted by kungfukoi at 1:09 PM No comments:

Wayne the Stegosaurus: A Motionpoems Animated Short from The Mill on Vimeo.

Enjoy Wayne's deluded yet charming sense of the world that he lives in and hopefully you'll receive some affection and good times out of it.
I was fortunate enough to co-direct this vid with Aran Quinn for The Mill Plus  and Motionpoems offered us to contribute to their 2014 film festival. We choose the Poem, Wayne the Stegosaurus by Kenn Nesbitt to make a short animation to. brilliant fun bringing Arans illustrations into a 3D world that we created while keeping the handmade cel look dominant.

Also, Wayne the Stegosaurus is featured on the Mill blog. He is also quite popular elsewhere on the internet, having been today's Staff Pick on Vimeo, being featured on Creative Review, Motionographer, io9, Creative Planet Network, and Creative Inspiration. He has gotten close to 37K hits on our Vimeo page.... and rising. 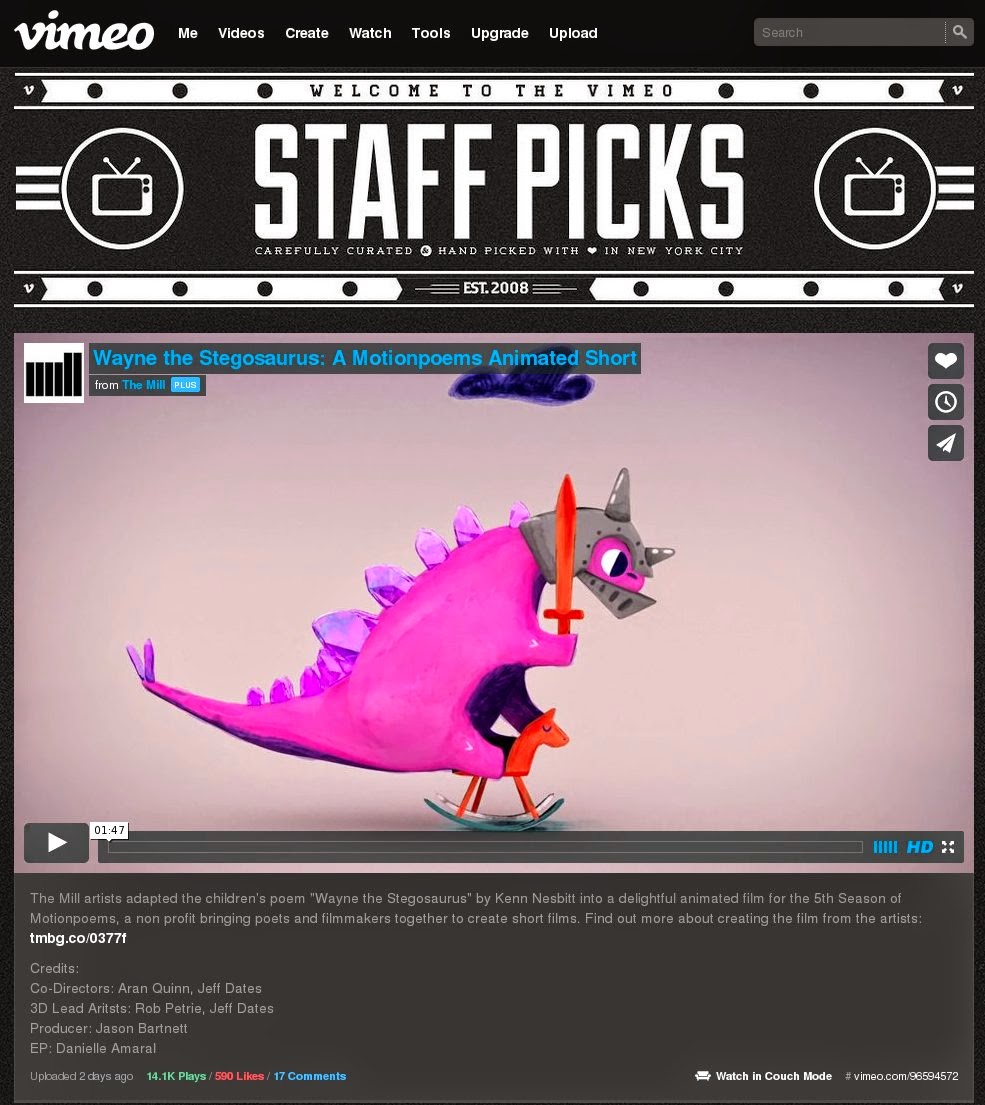 Posted by kungfukoi at 8:17 AM No comments:

Posted by kungfukoi at 8:11 AM No comments: